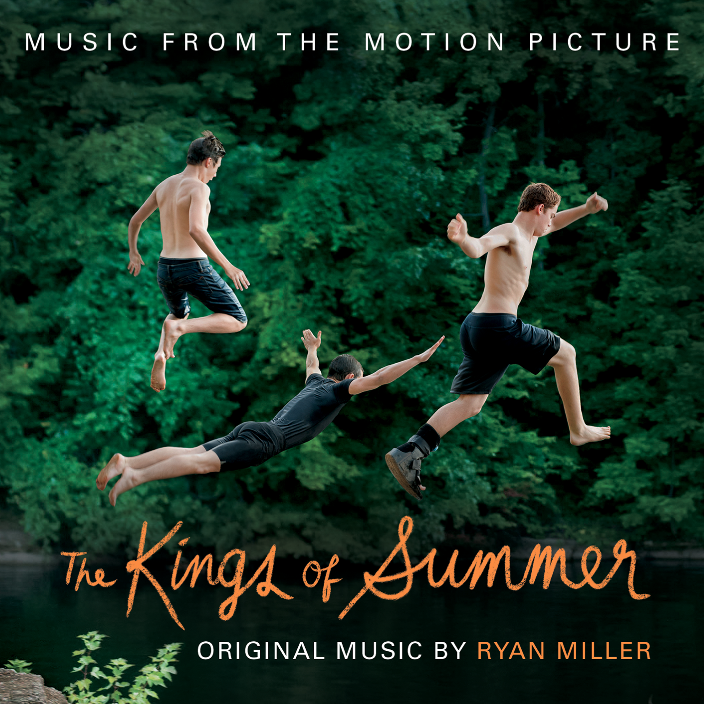 This 2013 Sundance favorite directed by Jordan Vogt-Roberts and produced by Tyler Davidson is the summer’s coming-of-age comedy. Three teenagers decide to move to the woods, build a house and live off the land. Guster front man Ryan Miller composed the highly original 8-bit esque melody; the album includes hip hop songs by Kevin Writer & Douglas James (The Skywalkers) and Golden Clouds by The Orb. CBS Films is releasing the film.

Note from the Director: The Kings of Summer was always intended to be a mash up of old and new. I wanted to combine the classic themes and techniques found in movies of the late 70’s and 80’s with very contemporary comedy and characters rooted in the plight of the Internet generation. When I first started talking to Ryan Miller I mentioned wanting to explore the idea of creating a simplistic 8-bit esque melody similar to the works of Koji Kondo. Many people aren’t familiar with Kondo’s work but they’ve certainly heard it as he created the themes to Zelda, Mario Donkey Kong and many of the Nintendo melodies that basically defined my childhood. Ryan and I immediately started getting excited about the challenge of fusing the elements that made digital 8-bit melodies so iconic with an organic score of real instruments. We never wanted it to feel like a gimmick. The idea was that if kids from this generation were running away into the woods, the closest experience they could draw upon would be playing an adventurous videogame so the sounds that are guiding an audience should reflect that. Unfortunately that wasn’t exactly an easy thing to accomplish and we almost gave up on it. One day I was sitting around listening to a bunch of music from Super Metroid (because I’m a dork) and the palate of sounds used in that game finally helped us breakthrough and find a toolset we could work with. Once we made that initial breakthrough it was an incredibly exciting time.

Ryan and I worked extremely hard to balance this videogame component into a traditional score as we never wanted to snap anyone out of the movie by noticing the electronic elements. Ryan did an incredible job using the 8-bit elements to make the score feel bigger and ultimately more unique. There was a big conversation about how the score should evolve as the movie unfolds and what the ratio of synthetic to organic sounds should be. As the movie goes on and transitions from a fun adventure into something darker and more grounded in heartbreak and the reality of growing up – the score makes a shift as well. Initially the score starts heavily rooted in 8-bit tones with light elements of real instruments and it slowly shifts into the opposite. As Joe is forced to leave his childhood, the videogame elements slowly take a back seat. I’m extremely proud of what Ryan ended up making as I think it perfectly fits the mash up vibe the entire movie has.

The whole movie is a throwback to an era when movies felt less disposable and I think what Ryan created is not only unique but also moving. I believe that comedy can be beautiful, touching and evocative and Ryan’s score is an enormous part of that.

Another huge component of the film was my desire to buck the trend on what an indie soundtrack should be. I didn’t want the soundtrack to be filled with emotional acoustic music as the boys were expressing their freedom in the woods. This is a different generation and it was important to me that the movie contain hip hop. I’m sure there will be some people who watch the movie and get confused when the hip hop montage set to “How I Rise” comes on, but I think it fits perfectly with the mindset of the younger generation. I turned to my good friend, frequent collaborator and immense talent Kevin Writer for this task. I temped in some extremely expensive and popular rap tracks and handed it to Kevin to replace knowing full well that he would return with tracks that were better than what we started with. He did not disappoint.

The combination of all these elements hopefully creates a world and landscape that’s memorable and full of life. I’m incredibly thankful that the folks at Milan Records have made it possible for the contributions of Ryan and Kevin to be heard on this soundtrack. I hope this movie finds an audience and people can keep discovering this music.
– Jordan Vogt-Roberts, Director