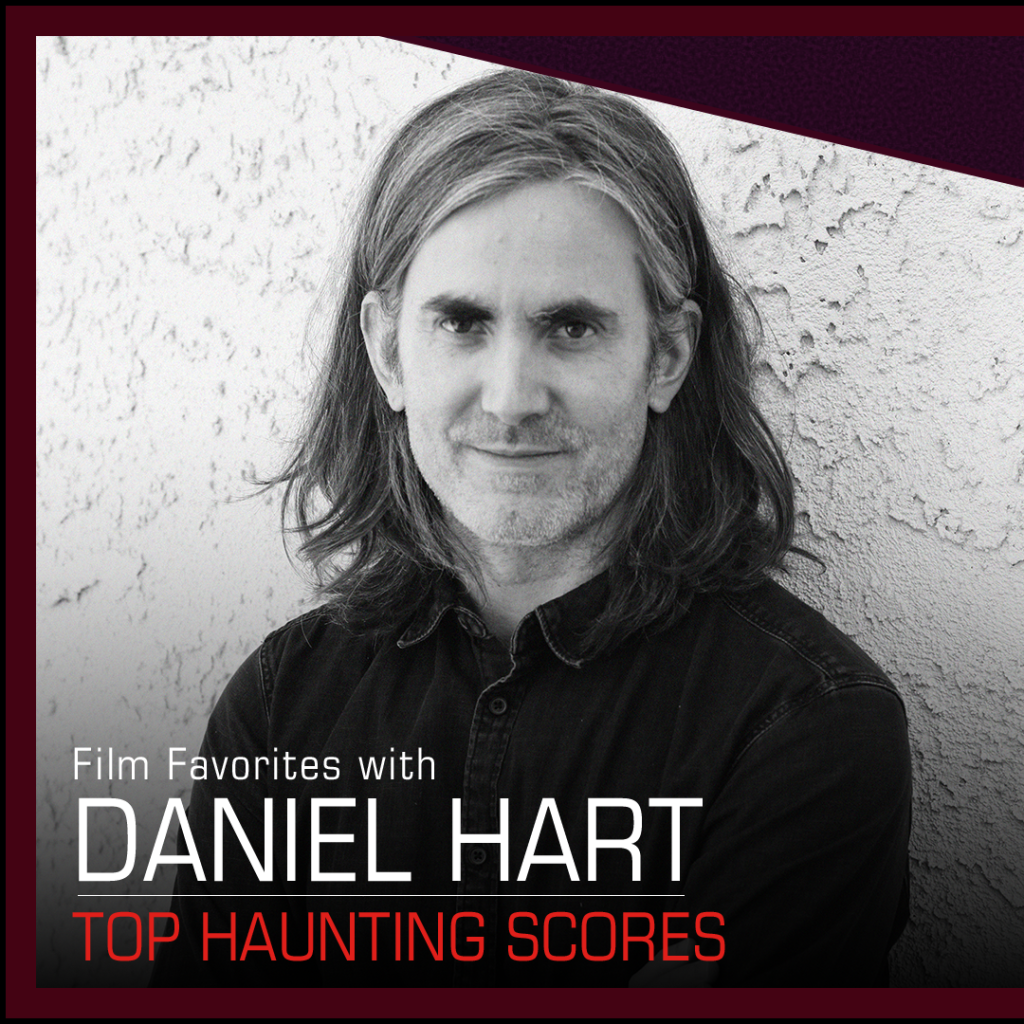 This Halloween season, critically-acclaimed composer Daniel Hart joins us to discuss his favorite spooky scores and soundtracks. Daniel Hart, who has composed a plethora of horror scores such as A Ghost Story, The Exorcist, and most recently, Anne Rice’s Interview with the Vampire, goes in-depth about his top picks and some influences throughout his career.

Read along and get into spooky season by listening to his haunting scores!

“Bernstein’s score is a masterclass: it’s fun, appropriately spooky, complex but accessible, instantly recognizable…I’m playing the main theme in my head right now. His ability to underscore dialogue in a meaningful way that advances the story without ever intruding on what’s being said is something I come back to study again and again. John Landis’ decision to bring Bernstein back, starting with Animal House, was a stroke of pure genius.”

“How could a list of favorite haunting scores be complete without John Carpenter? And yet it’s Ennio Morricone’s orchestral work on Carpenter’s The Thing which sticks in my mind. The nuance, the impending dread, the trademark Morricone small orchestra arrangements with the super close mics – it’s all the more terrifying for all of its subtlety. Nothing is belabored, and its elaborate, intricate harmonic structure feels somehow effortless upon listening. Some of the score’s rhythmic figures remind me of his work on The Untouchables, which is one of my favorite scores of all time.”

“I’ve made my way through Michael’s score for Us a lot more than I have NOPE, but I spoke quite a bit about Us as a reference for The Green Knight, so I want to talk about this next work of art instead. His writing does an incredible job of treading the same line the film does, between equal parts wonder and terror. The music is responsible for so much of that almost unending sense of apprehension, that constantly unsettling feeling. And yet the drone-based opening theme is so mysteriously inviting, and all the genre stuff, like ‘Jupiter’s Claim,’ brings a smile to my face every time I listen.”

“I know Mica’s score ends up on so many of these lists, but I feel compelled to mention it again. As soon as the film came out, projects I was hired for were being temped with her music from Under The Skin. That kind of immediate and enthusiastic response for Mica’s writing from directors and editors alike is indicative of why the score succeeds so well in its musical storytelling: it’s as unnerving as the aliens it accompanies, it takes wild chances which pay off at every turn, and it doesn’t sound like anything else. Consequently, having to replace Mica’s score in a scene I’m working on is a near impossible task. What could thrill the director or the audience as much as the newness of her brilliant work?”

“Pee Wee’s Big Adventure is the first film score I remember actively noticing and liking. To me, Beetlejuice is a huge step up, both for Danny Elfman, and for Steve Bartek’s orchestrations. It has the same childlike whimsy and sense of silly-yet-perilous adventure as so many of his early scores do, and his love of composers like Bernard Herrmann and Franz Waxman is on full display, in a reverent but not overly derivative way. And the main theme, after its introduction during the opening credits, doesn’t show up again until an hour into the film? And it’s still seared into my mind somehow as one of Elfman’s most memorable themes? Truly remarkable work.”

“Shirley Walker’s sense of harmony and rhythm puts most of us to shame. Her work on such a ridiculous horror film is no exception. In fact, I think her writing lends this film an extra gravitas it wouldn’t have otherwise. She raises the stakes and introduces and develops musical ideas which give the story a weight beyond jump scares and gratuitously gory deaths, while staying true to the format, never punching down.”