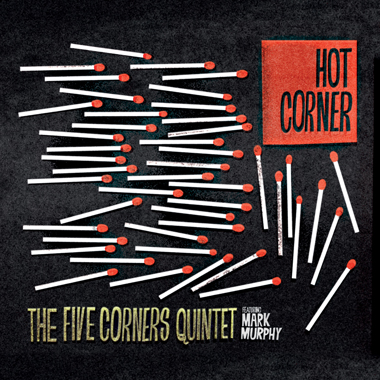 The Five Corners Quintet is a Helsinki-based jazz dancefloor outfit that updates the past with panache. Their sophomore release Hot Corner will be out on Milan Records on this Spring “Top of the list for my hall pass from Drudgery would be Hot Corner, the latest from Finland’s finest, the Five Corners Quintet. ‘Hot Rod’ kicks things off with some fried chicken guitars, easy going handclaps and loosey goosey piano giving modal jazz a shuffling, entirely different flair. ‘Shake It’ is the stormer with the tight interplay of Jukka Eskola on trumpet and Timo Lassy on tenor sax riding roilling rhythms from Antti Lotjonen and Teppo Makynen. Tuomas Kallio of Nuspirit Helsinki fame does all the arrangements and he should be especially proud of this one” XLR8R (USA) “About as hip as you can get without throwing your back out”ALL ABOUT JAZZ
The enormously successful live band consisting of Teppo M?kynen (drums/bandleader), Timo Lassy (sax), Jukka Eskola (trumpet), Mikael Jakobsson (piano), and Antti L?tj?nen (double bass), also remains. On “Hot Corner”, however, the band takes a larger role in comparison to the first album. Tuomas Kallio is the “commander-in-chief” once again, but there’s a stronger sense of community also in the studio.

The new sound of TFCQ could be described as leaning towards the “Hot” of the album title more than the cool of their previously recorded work. Here, the impact of the live band is evident. Kallio’s compositions also move away from standard jazz into fresh new territories, where even the occasional flirt with genres such as rockabilly is to be expected. The EP preceding the album release already showed marks of the band “rocking” rather than “swinging”, and those directions are further explored on the upcoming album.