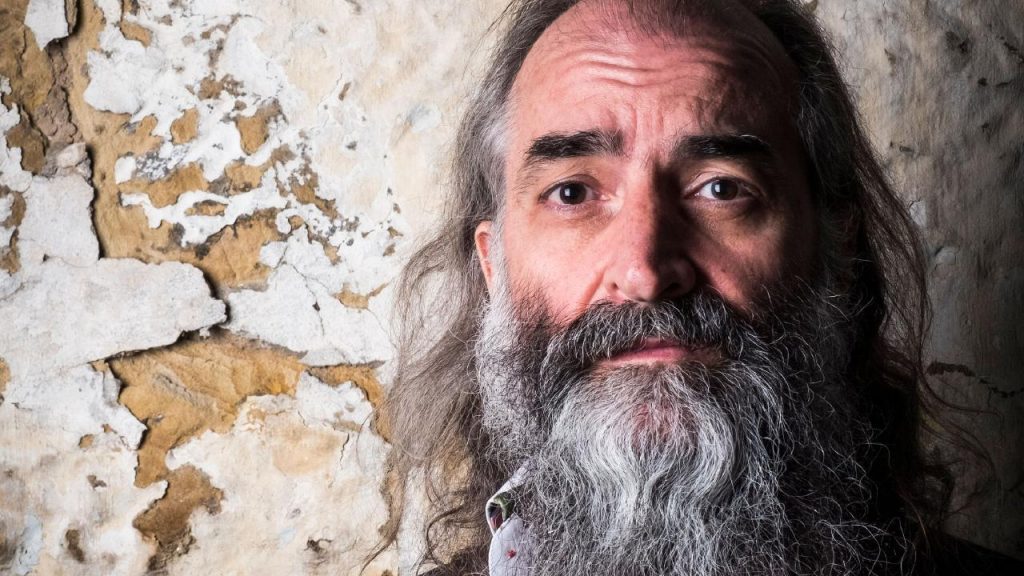 We sat down with Warren Ellis, the co-composer with Nick Cave of the acclaimed thriller Hell Or High Water.

What lead you to film music?

Like most things in my life, a series of accidents.
I have always loved watching films as long as I can remember. I have always listened to instrumental music, Miles Davis, John Coltrane, Roland Kirk, Alice Coltrane, Stravinsky, Arvo Part informed me just as much as The Stooges, AC/DC, Suicide, Neil Young, Nina Simone, etc. I started playing in bands in the early 90’s. My first band was an instrumental group called Dirty Three. We scored a film called Praise in 1998, directed by John Curran. For that we jammed for a day, gave him 4 hours of music and he cut to that. There was no way we could create a 20 second cue to fit an image. By the mid 90’s I was working with Nick Cave and the Bad Seeds and we developed a close working relationship. In 2004 he asked me to work on the score for The Proposition directed by John Hillcoat and I found the approach I had developed in playing rock and roll gave me a different way into this world. And it also gave me a new found freedom I hadn’t anticipated that I could take back to the groups I am involved in. Creating them directly informed the formation of Grinderman. But The Proposition felt like the beginning of score work for me. Since then I have created over 15 scores with Nick Cave, including The Assassination of Jesse James by the Coward Robert Ford, The Road and Lawless. Then, Mustang is the first on my own.

How were you contacted to score Hell or High Water?

David MacKenzie reach out to us via Rachel Shane, one of the producers of Hell or High Water who had worked on Lawless .He was aware of our work on other scores. We were both fans of Starred Up and watched a rough edit. We loved the film straight away, and the script is fantastic.

How did the collaboration with the directors go? A few words on the creative process….

We met with David in Brighton, at the Retreat Studio where we work regularly since 20 000 Days On Earth score composition. We would play material, compose on the spot, and David would respond. He wanted the music to be ‘grainy’ and with grit.
The whole score was created in five days, then a further five days to refine it and do some string overdubs. Davis was present at every session, which was both informative and productive.

And a few words on your collaboration with Nick Cave…

Our working process seems to compliment each other. It is the sum of its parts. We have been working together over twenty years and much of it happens instinctively.
We are both interested in the process evolving. Scores give us this possibility, and allow us to take ideas back to band pursuits. There is also an incredible amount of freedom doing music for a film. Serving something else.
Being in the studio with Nick for whatever purpose is always a pleasure and an honor.

How did you choose the additionnal songs?

David selected them with his musical supervisor

Music that worked well with the image and added a weight or gravitas to the characters. We wanted a lean pallet that evoked the landscape and the leanness of the dialogue

How did the recording go?
Fabulous. I love being in the studio, even on a bad day. Always something to learn.

It plays the role that is required of it. In most instances it should support the image, add another dimension. I don’t believe in wall to wall music, or music which is there because a director feels we aren’t getting it from the performance. A lot of the time music in films seems like wallpaper or glue. To my taste, scores for Under the skin by Mica Levi, Aguirre by Popul Vuh, Pat Garret by Dylan McCabe and Mrs Miller by Leonard Cohen serve the film well and bring something else, something other worldly. I think Gaspar Noe has a great use of music, and Thomas Bangalter does exciting things.
It’s also great when there is no music. I love Driller Killer and the score for Snowtown is cool by Jed Kurzel. Most of the time I watch films I always wonder why they put so much music and why that kind of music. When the sound, image and action work together in the best way they can create something extraordinary. One of my favorite composers is Artemiev and the films of Tarkosky.
I appreciate in films when effort has been made to heighten atmospheres on the sound stage. I like how involved David Lynch appears to be with his films. Eraser head,The Elephant Man, MullHolland Drive, I love the way we are thrown in a hyper real world.