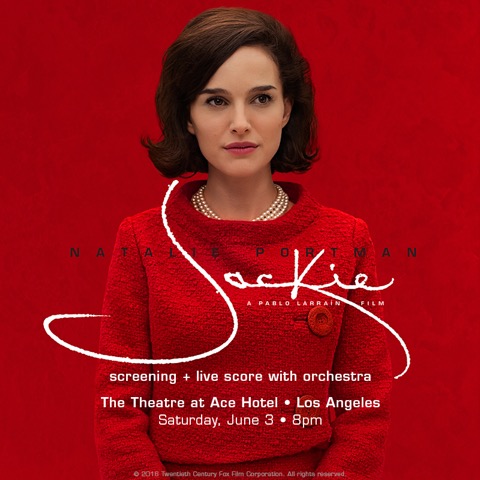 Set to an unforgettable soundtrack by composer Mica Levi, JACKIE garnered the first Academy Award nomination for Best Original Score for music written by a female composer in twenty years.

JACKIE is a searing and intimate portrait of one of the most important and tragic moments in American history, seen through the eyes of the iconic First Lady, then Jacqueline Bouvier Kennedy (Natalie Portman). JACKIE places us in her world during the days immediately following her husband’s assassination. Known for her extraordinary dignity and poise, here we see a psychological portrait of the First Lady as she struggles to maintain her husband’s legacy and the world of “Camelot” that they created and loved so well.

Mica Levi (Micachu) is a London based artist, composer and music producer. Mica studied composition at the Guildhall School of Music, garnering her first classical commission from the London Philharmonic at age 20. Her iconic score for Jonathan Glazer’s Under the Skin won the European Film Award, the Los Angeles Film Critcs Award and was nominated for a BAFTA for Best Music. Mica was also the youngest artist in residence at London’s Southbank Center and has performed at major art institutions worldwide including the Getty, MoMA PS1 and the Barbican.

Having performed the US premiere of Mica Levi’s score to Jonathan Glazer’s sci-fi drama UNDER THE SKIN in 2015, and the world premiere live score of Paul Thomas Anderson‘s PUNCH-DRUNK LOVE with Jon Brion and Joanna Newsom at the Ace Hotel in 2016, Wordless Music Orchestra now returns to the Ace for the world premiere of last year’s most haunting original film score.