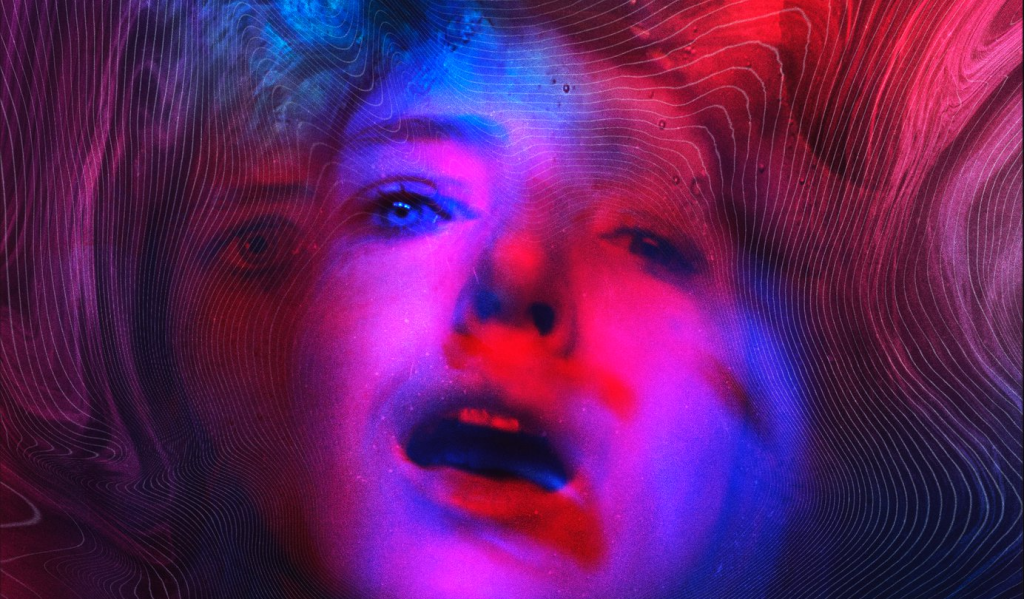 She Dies Tomorrow, a darkly comedic thriller from writer and director Amy Seimetz, was released earlier this month by NEON. The film follows Amy (played by Kate Lyn Sheil), down a spiraling path of dread and anxiety after she comes to the realization that she’s going to die the next day.

Amy’s existential crisis, which hits quite close to home during a global pandemic, is a vibrant and contagious experience…literally. Her rapturous fear of death quickly spreads to friends and a few strangers too, each confronting their imminent mortality while bathed in alternating flashes of neon light. The colorful fever dream is soundtracked by up-and-coming LA-based composer duo Mondo Boys (Mike Griffin and Mike Schanzlin). Their beautifully haunting, classically-inspired compositions glide and soar alongside the film’s entrancing cinematography. We sat down with Mondo Boys to discuss movie music, Mozart, and the makings of the She Dies Tomorrow score.

What was your first introduction to film music, and how did you get your start as composers?

Mike G: We grew up obsessed with movies and had been writing and producing music for a long time, then I went to film school and we started getting involved that way.

Mike S: When Mike G. was in film school, we were putting out songs and mixtapes. Nat Sanders, the editor and Barry Jenkins, you know who he is, needed an original song in Barry’s first movie “Medicine for Melancholy” and they liked our stuff and we were all becoming friends so it was quite an introduction!

How did you first get involved with She Dies Tomorrow?

Mike G: Yeah, let’s see, Amy Seimetz was making “The Girlfriend Experience” season two, and Greg O’Bryant was editing that, threw our name in the hat so that’s how we started working with Amy. I remember we sent some demos in and were just hoping we’d be notified for a call with Amy, and we’re thinking “GREAT! Maybe we get to talk and audition more demos”, but on that call I think first thing, she’s like “Okay so you guys are great, you have the job.” And the rest of the time we just talked nuts and bolts of the story.

Mike S: And then for “She Dies Tomorrow,” we knew she was making some mysterious project.

Mike G: Halloween, I remember, we’re out wandering around Downtown LA, watching a late night short film collection with Spindell’s “The Babysitter Murders,” which we didn’t score but we ended up scoring the feature, “The Mortuary Collection.” We’re out with Amy and Gates (one of the producers) and Amy is like… on the sly…. hey I have a….something for you to check out. It was always super secretive. Watched some scenes, it wasn’t all written yet but we sent over our best guess at what the music could be. And that is mostly in the movie now.

What was it like working with director Amy Seimetz again? How was it different from previous projects you’ve worked on?

Mike G: The thing about Amy is that Plan A seems to always work. I don’t know what it is. I’m sure it’s not like that in her head and by all means we get notes, take big swings, try things totally different but she’s really different than other filmmakers in that it seems like we’re never rethinking it. It just seems like the direction is there from the beginning.

Where does your creative process start when scoring? How do you work together as co-composers?

Mike S: We’ve been writing music together since we were fifteen but come from slightly different musical backgrounds, so usually we’ll each have our own take on how themes and cues should play and develop throughout a film. Once we start writing there’s always a sort of mind-meld that happens and we gravitate toward the best of our ideas. It’s always a fun process of discovery and refinement, and at this point it’s hard to imagine scoring with someone who isn’t such a close friend.

Mike G: We’re always open to new ideas about how to start a project, a script is great, talking is great. It really comes when we have footage and can hear dialogue, see how it’s cutting. Then we do music with that, really. That’s the stuff that sticks usually.

Mike S: Really it comes once we get notes.

Mike G: Yeah, we typically take a first pass on something, send that to the director, and from there we start figuring it out together. It’s a lot of exploring and rewriting and we love that.

Was there a certain sound or mood you were aiming to capture through the music?

Mike G: It was thrilling to see that this movie was going all the way ‘human existential sadness.’ No plot mechanic work for us, no “make this joke work.” This was all getting into what the Amy character is playing with, wallowing in with the first sequence on her. Then blowing it out from there.

Do you have a favorite track from the album?

Mike G: I think the “Le Portail Ouvre”, it has that melody that has been a song sitting around with a phrase I like to sing and stuff, now it’s immortalized in this one scene. But it just seems special to me and it hits at a time when a lot has happened in the story, amazing visuals by Amy and Jay Keitel and we get to sit and kinda just listen.

Mike S: Probably Mozart’s “Requiem” because I feel like I finally got a music degree working on that song for a month. But of our stuff the one that hits me is “Le Portail II”, which has the main melody for the movie that we got to go totally crazy with. The key changes spiral off into places we didn’t know what to do with so the song just cuts away at some point.

What was it like reinterpreting and developing your version of Mozart’s Requiem for the film? Did you listen to any other recordings to prepare?

Mike S: Yeah, we spent a lot of time with a variety of recordings as the movie was gearing up. Our take on it changed quite a bit while we worked on the movie and we experimented with a few different approaches to the piece, but at some point Amy said, ‘the rest of your score is the sound I want, can you make the “Requiem” more like that. Just make it more like your score.’

The choral and vocal elements used throughout the album are quite haunting – what was your recording process like?

Mike G: We have some special voice recordings. It seemed natural to have that soaring yet kinda distracted female opera voice in there. That was actually in the early demos that Amy cut in. We never really thought twice about it actually.

There are many recurring sonic motifs throughout the film and soundtrack, was there a method behind the way you developed these themes?

Mike G: We all spotted the movie together and took cues from Kate and Amy about the music that became the “Desert” cues like “Desert in a Car”, “Desert in a Dune Buggy”.

Do you have an all time favorite film soundtrack, or a composer that you feel particularly influenced by?

Mike S: Johnny Greenwood is a favorite – “There Will Be Blood”, “The Master”, “Phantom Thread.” Morricone, all of his stuff has been huge. We actually started off doing a Morricone-style score on the first movie we worked on, “Shangri-La Suite” by Eddie O’Keefe. That stuff is really important to us.

Your score for She Dies Tomorrow manages to sound simultaneously classic yet contemporary at the same time, is there a certain way you develop this unique sound?

Mike G: That’s exactly the conversation we’re having every day. That’s what we were going for so I’m glad that came across.

Mike S: We’re becoming the guys who score movies with a hybrid of ‘super modern’ and ‘rooted in traditional.’ What exactly is that?

Mike G: Every movie is a little different. The modern thing, in this case, is partly the beat. It’s orchestral timpani but the “boom”…”clap” beat with soaring opera really pops off for me.

Mike S: The modern thing is also sort of an irreverence that Amy pushed us into here but we’re always happy to do. A little bit of irony helps us use very traditional music in a modern way.

Mike G: Something like that. Seems like all of our meetings are about this right now. When we figure it out, we’ll let you know.

She Dies Tomorrow is now available on-demand via NEON. The official film soundtrack is available on all digital platforms.