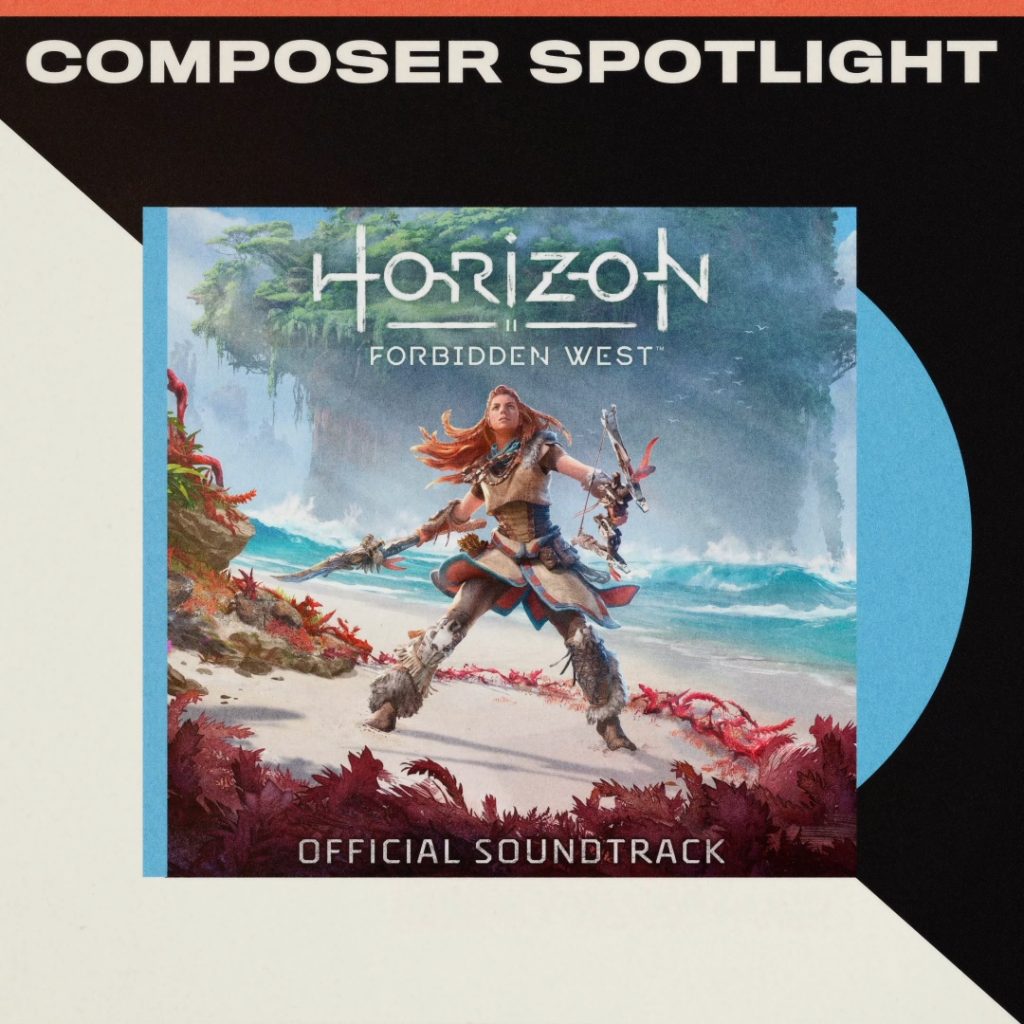 At 142 tracks long and over 7 hours in runtime the recently released soundtrack is as expansive as the game’s landscape, ranging from soaring orchestral pieces to dark, otherworldly electronic interludes.

Follow the full Spotlight playlist here and explore each composer’s selections below!

Ivor Novello award-winning duo Joe Henson and Alexis Smith, better known as “The Flight,” began collaborating in 2005 when they co-produced an album for Joe’s band Seventhsun. After realizing they had a similar approach to life and wildly divergent musical tastes, they formed a creative partnership that quickly encompassed songwriting, production, and composition.

Now, this A-list composing duo has worked with some of the biggest names in the music industry and are widely respected in the world of video game music. Below are a few tracks that were key inspirations behind The Flight’s sonic palette for the Horizon Forbidden West soundtrack:

Niels van der Leest is an award-winning video game composer and sound designer who has been working in the industry since 2007. Niels combines his classical music degree in percussion and world music, his background in the orchestral and ensemble performance and the strong sense of sound design to create unique music and sounds.

Read along as Niels discusses some of his favorite tracks, why he chose them and how they have influenced some of his own compositions.

“Xenoanthropology” from Arrival by Jóhan Jóhannsson
This track just had something otherworldly to it, something we were also trying to accomplish with the sound of HFW. The World of Horizon is not burdened with a musical history like our own version of Earth. The make music in a way that feels natural to them and on instruments that they make themselves. What Jóhan Jóhannsson created with the score for Arrival was that it felt alien yet recognizable.

“Ori, Lost in the Storm” (feat. Aeralie Brighton) from Ori and the Blind Forest by Gareth Coker and Aeralie Brighton
Sometimes a track just touches you in a special kind of way. No matter how often I hear this, the hairs on my neck rise and I get goosebumps. As composers for games, we always reach for trying to encapsulate the essence of a game in your music. This track, however short, was a really good example of that quest.

I was tasked to create the music for all the tribes in Horizon Forbidden West, one of which was the Utaru tribe. You get pages and pages of backstory on a tribe which gives you a good insight into what kind of people they are. Being pacifistic in nature and also just living on the land, I felt I had to take a journey to the hippy era, the time of the Beatles, and their meditation trips to India. This track caught my ear because of the Indian origin (a Raga) but also the sound the viola soloist gets out of his instrument. Listening to this while walking I would not have guessed this was a viola until I saw the performance on YouTube. Again, another example of this otherworldly feeling of something sounding new but still something we know.

“Beacon” from FEZ by Disasterpeace
In the same research as the track before this track by Disasterpeace, he uses a lot of modal jazz in his music which uses wide chords and changing minimal notes to accomplish chord progressions. A similar quality the raga above also has, constant bass notes on which all sorts of magnificent stuff happens. These two tracks made the base of the inspiration for the Utaru tribe music heard in “Wither and Ache.”

I believe this scene was one the longest in the movie Blade Runner 2049 with such a big tension building up from the first to the last second. The sound design in this track is amazing!

“Reprogram” from The Mandalorian by Ludwig Goransson
The complete score of The Mandalorian show is both an homage to John Williams’ Star Wars scores and a completely new view of how this galaxy from far far away could sound. Ludwig Goransson’s combination of synth-based sounds with the orchestral sound is very nice. Not so much large hybrid sounds but very intimate, something we also strove for with the score of Horizon Forbidden West. Other than this being inspirational music, I listened to this exclusively for several months because of how much I love Star Wars and how generally epic this music is!

“Main Title Theme – Westworld” from Westworld: Season 1 by Ramin Djawadi
Specifically, the ending of this track and the bowed instrument, were what got me. I think it was the point where I thought: “I’m going to need to build myself an instrument that can produce this sound!” As it so happens, I did, and it weas used all over my tracks. For example, “Show Her Our Teeth” starts with one of the boxes I built for this score.

This was a test track just before we started working on Horizon Forbidden West. With everything I didn’t know about the game yet I imagined this would be how it could sound.

“Markos and Markos” from An Ancient Observer by Tigran Hamasyan

Not per se an inspiration during the creation of the score for Horizon Forbidden West but something I listen to a lot during my time and while falling asleep. A palette cleanser if you will. I love how you hear every intense breath of the composer and hear him sing along with the sometimes impossible melodies he’s playing.

Oleksa Lozowchuk is a award-winning composer, music producer, music director, music supervisor, and multi-instrumentalist whose work spans many genres in Video Games, Film, TV, Advertising as well as Dance and the Concert Stage.

He joins us to discuss the many different musical palettes heard in Horizon Forbidden West as well as some tracks that have resonated deeply with him over the years.

“Horizon has an inspiring musical palette which is a unique blend of human voices, acoustic instruments, organic textures, string octets, rare flutes, tribal percussion and various synths. Add to this a moving story and strong characters who need emotional resonance from memorable melodies and engaging harmonies and clusters; alongside much grit and edge, and voila – you have a dream gig for any composer. I find that the music that feeds me while I’m working, reminds me of life, death and beauty. As I listen to other music during the gaps between writing, I find it moves me and eventually spills over into my own work.  I’ve included some works that resonated deeply with me over the years while working on the score for Horizon Forbidden West.”

“Psychogeography” from Voices2 by Max Richter